Investors should divest their holdings from factory farming as evidence suggests that the conventional meat industry is either stagnating or falling as demand shifts towards the alternative protein sector.

The future of food in the 21st century and beyond lies away from factory farming. By 2050, the world’s population will reach 10 billion.1 In order to sustainably feed this ever-growing population, our current food system which wreaks havoc on the planet2 and our health3, needs to be and is being reimagined. This can be done with plant-based alternatives to conventional animal products. These options are steadily growing in popularity. These alternatives have a significantly lower carbon footprint, with research indicating that plant-based meat emits somewhere between 30%-90% less greenhouse gas emissions and use 47%-99% less land than conventional meat.4

In the United States, grocery sales of plant-based foods used as direct replacements for animal products from factory farming have increased by 31% over the past 2 years.5 In comparison, dollar sales of conventional animal products are either declining or growing only modestly, with dollar sales of dairy milk and yogurt decreasing by 3%.6 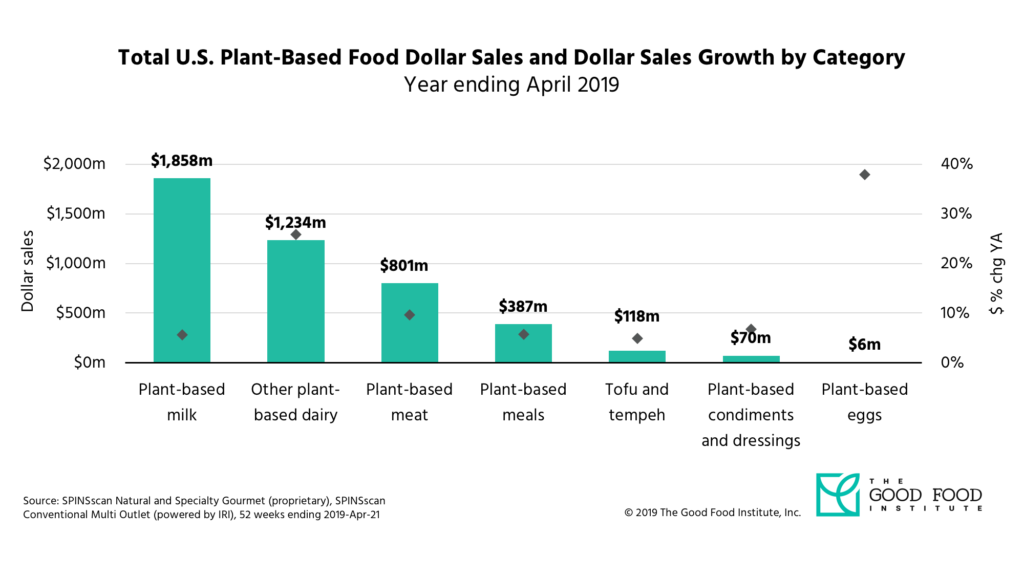 Further, consumer attitudes towards factory farming – as knowledge and awareness of the practices involved increases – have been gradually shifting over the past few years. Studies have shown that approximately 49% of Americans support a ban on factory farming7 and somewhere between 34% and 47% support a ban on slaughterhouses.8 Further, a recent report released by RethinkX, a think tank which analyses and forecasts the scale of technology-driven disruption, predicted that the demand for products from cows in the US will decline 80% to 90%, and the chicken, fish, and pig markets will face a similar fate.9 They further predict that the revenue of the US beef and dairy industry will decline by close to 90% by 2035 and countries which rely on conventional animal farming are particularly vulnerable to a “serious economic shock”.10

Therefore, in order to sustainably feed the world, investments into the food system need to put in the right places. Even the biggest players in the conventional meat and dairy industries have taken cognizance of this, with Tyson Foods, the largest meat producer in the US releasing its own plant-based products11 and Nestle and Unilever launching their own products to capture the booming plant-based segment.12 While the market boom for plant-based products is evident in the US and Europe, Asia-Pacific is another region which is going to be a hotbed for the alternative segment. FAIRR, a collaborative investor network raising awareness on the risks of intensive livestock farming, in its report “Appetite For Disruption: How leading food companies are responding to the alternative protein boom” found that annual sales of plant-based meat in China have registered year-on-year growth rates of about 15% since 2014, while “two in five urban Indonesians followed a plant-based/vegetarian/vegan diet in 2018, while three in five urban Thais cite avoiding red meat due to health reasons.”13

Similarly, in India (home to over 1.3 billion people) as well, the interest in alternatives has spiked in the last couple of years, especially with respect to cell-based meat. Not only is the world’s first research centre on cellular agriculture going to be established in Maharashtra, India14, the central Department of Biotechnology has also made a grant of $640,000 for cultivated meat research.15  Further, consumer acceptance in the two largest markets in the world – China and India – is also extremely high with an estimated 62% of Chinese consumers and 63% of Indian consumers were “very or extremely likely to purchase plant-based meat”, while for cell-based meat, the figures clocked in at 59% and 49%, respectively.16

On account of the circumstances listed above, Pivot Food Investment believes that investors should be divesting from factory farming and would be better investing their money in booming markets such as plant- and cell-based alternative proteins.

Be one of the first to donate
Let's defund factory farming!

We want your advice.

You likely know things that could help us convince your college/company to divest from factory farming.
(You do not need to be an expert.)
Do you have 20 minutes?
(To jump on a call or answer questions via email)
*You'll only get one email and it will be from a human.

We share good news and opportunities to help monthly.